Cross-posted from The Downstream Blog:

View of the lumberyard fire behind the King County Environmental Lab from across the Fremont Cut.

On the night of Saturday, Nov. 10, a four-alarm fire started at a lumberyard right across from the King County Environmental Lab.

The fire was the largest Seattle has seen since 2010 with flames shooting over 100 feet into the air, according to the Seattle Fire Department blog. In the end, the fire that burned two buildings to the ground and damaged three others was determined to be arson.

That night, in addition to the 142 firefighters that helped fight the fire, King County employees were coordinating their own response to protect the Lab and the SoundGuardian research vessel. The 4-alarm fire was less than 200 feet away from the Lab which worried employees that both the Lab and SoundGuardian were at risk.

“I got a call from Ben Budka, the Lab’s Field Science Unit Supervisor and Trouble Call Coordinator, at about 9 p.m. Saturday night” said Diane McElhaney, Environmental Lab Manager. “He said, ‘It doesn’t look good. Bob [Kruger, SoundGuardian captain] and I are going to try to save SoundGuardian.’”

The lumberyard where the fire occurred is across the street from the Lab.

Diane began wondering where they could take SoundGuardian if it had to be moved. And though the Lab is concrete, she knew water damage to the equipment could be catastrophic. When Diane met up with Ben, Bob, and, by then, Terry Siebens, Conventionals chemist, at the Lab just before 10 p.m. she could not believe what she saw.

“There were 15 fire trucks, as well as fire boats in the canal. The Lab was filled with smoke,” said Diane. “You could see the spray of water from the fire boats going over the road in huge arcs.”

The aftermath of the fire: Not only were buildings and cars destroyed but tarps of boats just five slips down from SoundGuardian – in the Canal Marina – melted. The Lab is the grey building is in the background on the left

After hearing from fire officials on the scene that they had contained the fire, Lab employees decided that SoundGuardian did not need to be moved. Power infrastructure, however, had been damaged so power was off for several blocks and would remain off for several days. So the next concern was preventing a power surge at the Lab when electricity eventually came back.

“We went around the Lab and unplugged everything we could find,” said Diane. Previous outages had taught Lab employees that equipment needed to be brought back up in stages. After Ali Wandy (Building Engineer) joined Diane around midnight to make sure the bigger systems were shut down, they called it a night knowing there was much more work to be done in the coming days. 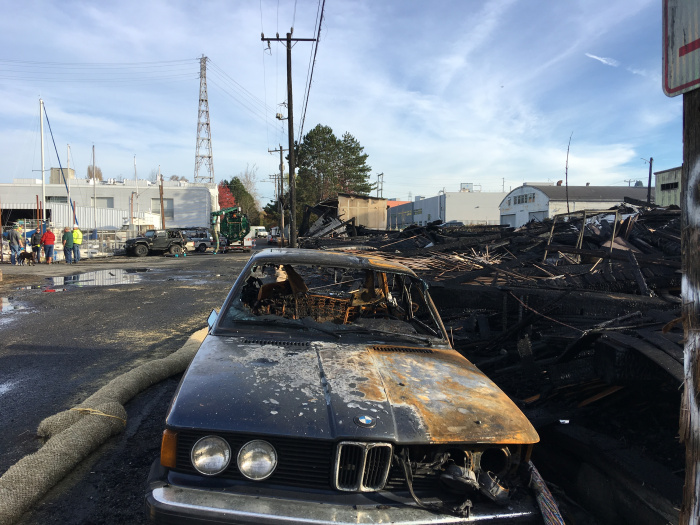 The aftermath of the fire – not only were buildings and cars destroyed but tarps of boats just five slips down from SoundGuardian had melted. The Lab is the grey building in the background on the left.

While the Lab is housed under the Water and Land Resources Division, Wastewater Treatment Division (WTD) employees cover safety for the Lab as well as construction management. In the face of a power outage, the two divisions had to consider how they were going to keep Lab samples cold for several days. WTD construction managers started looking at the possibility of getting a generator out to the Lab. A refrigeration truck was also considered, as was dry ice.

“We wouldn’t have lost all the samples, but they could have been compromised after 24-48 hours of reduced temperatures,” said Diane. “We have microbiology samples that need to be held at minus 80 degrees in some cases.” Fortunately, county and city leadership made it a priority to get power restored by Tuesday, Nov. 13 at about 4 p.m.

While there was no visible damage to the Lab, it “smelled like a campfire,” said Mark Palmer, WTD construction manager. By chance, Monday, Nov. 12 was Veterans Day, and a King County holiday, providing an extra day for the Lab to air out.

The fire also threatened the progress of a 16-month project to replace the Lab’s fume hood and air handling equipment with more energy-efficient systems.

One of the first shipment of fume hoods being replaced in the Lab.

“Diane called on us to help with the smoke that had been sucked into the Lab,” explains Allen Alston, safety officer. As a precaution, Allen and Bud McJimsey, WTD construction manager, worked with an air-sampling contractor to test the air quality in the Lab for both smoke and volatile organic compounds (VOCs) – gases released from burning materials that could be hazardous to people’s health.

“We wanted to ensure people weren’t exposed to poor air quality conditions,” said Allen. Everything came back good – which confirmed it was safe for the Lab staff and construction crews to return.”

“This incident was a good reminder about keeping emergency procedures and notification lists up to date,” said Diane. “I want to thank Ben Budka, Bob Kruger, Terry Siebens, Ali Wandy, Allen Alston, Mark Palmer, William Sroufe, Ken Bergstrom, Jim Faccone, and Josh Baldi for the immediate support they provided. We’ve had so many challenges these past two years and we could not have made it without this ‘A team.’”