The contractor is continuing site restoration as the Murray storage facility begins doing its good work for Puget Sound.

King County and the contractor, Shimmick Construction,  worked together to put the new facility through its paces, carefully testing the underground tank and facility equipment. The Murray facility includes many individual pieces of equipment, from electrical equipment that provides power to the facility to mechanical systems used to direct stormwater and wastewater into and out of underground storage tank. The testing process required several weeks, including testing of each piece of equipment, how the equipment functions together as a system, and how the system would perform in a storm event.

The final testing, completed in November 2016, involved filling the underground tank with nearly one million gallons of water to simulate an actual storm event. The facility functioned as designed, automatically filling the underground tank near capacity. Once the tank was full, flows were sent to the Murray Pump Station and onward to the County’s West Point Treatment Plant in Magnolia.

Now that the facility has been fully tested, it is ready to be used to protect waters enjoyed by many people who live and recreate in the Lowman Beach Park area. As early as next week, County operators will work inside the facility to monitor flows at the Murray Pump Station and operate the underground storage tank as needed.  The contractor will continue to restore the project area and install landscaping, creating an attractive space for people around a facility working to protect the waters nearby.

The underground tank has disappeared below ground.  The site will be transformed into the space shown in renderings below. 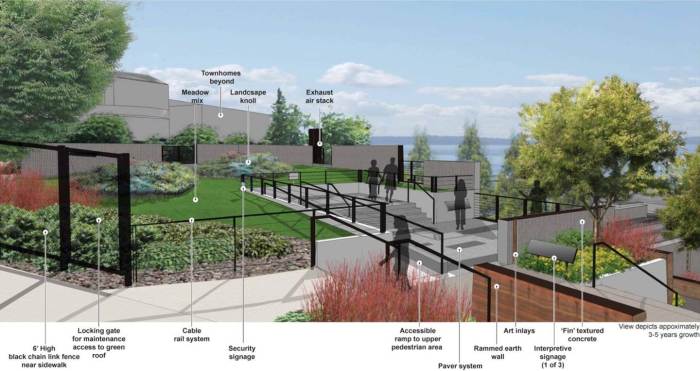