If you’ve been following along on our Instagram and Twitter, you’ll notice we’ve been talking a lot about the “Poofighters.” But who is this mysterious group?

Despite what the name might suggest, the Poofighters are not a group of volunteers armed with plungers manning the stalls at The Clink on Seahawks’ game day (though that group certainly deserves recognition). These Poofighters are the King County Wastewater Treatment Division’s Operations Challenge Team. For the past week, they’ve been attending the annual WEFTEC Conference competing in the Olympics of wastewater. 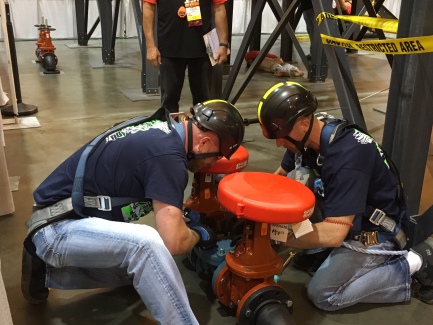 During this heated competition, teams from around the world display their talents and skills in five different timed events that simulate real-life challenges wastewater staff face on a daily basis. One event is a written test and the other four are physical. Each event is timed and WEFTEC judges scrutinize every move. Teams have to perform tasks not only fast, but correctly.  After all, people keep flushing, so we need to keep wastewater moving while we keep our most important asset- our workers- safe.

The Poofighters compete in these events:

The WEFTEC 2016 Operations Challenge  concluded yesterday (Sept. 27), and the Poofighters placed ninth out of a total of 42 teams, including ones from as far away as Argentina.

A huge congratulations to King County’s team for reaching the top 10 and flushing the competition!