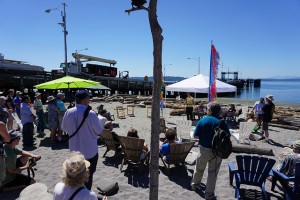 Celebrating a new pump station and the reopening of Cove Park.

It was a gorgeous day for a beach party!

On June 18, neighbors in West Seattle’s Fauntleroy community joined us to cut the ribbon on our newly completed Barton Pump Station upgrade project.

People were also excited about the grand reopening of Fauntleroy’s Cove Park, which was closed for three years during construction on the hard-working pump station that’s been in service since 1958.

Twenty-first century updates include new pumps with more capacity to serve the growing population while protecting Puget Sound and Fauntleroy Creek from stormwater and sewage overflows during heavy rains.

The Fauntleroy Community Association celebrated the park reopening and restoration with an original song, “Stream Echos”, composed by their members and performed by musician Tomo Nakayama-Tran. 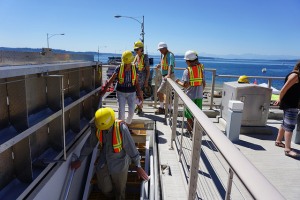 Artist Thomas Jay spoke about his iconic salmon-themed sculptures installed at the pump station, and community members toured the new station and learned about its features. (Check out the photo library.)

More information about the project is available online.