This past summer we were attending the Mercer Island Summer Celebration when we noticed a familiar image on a sandwich board outside of the Mercer Island Public Works booth. This hand-painted image was none other than the beloved “Bert the Salmon.”

During some down time, we asked one of the employees in the booth where they had acquired the painting.

“My 16-year-old daughter painted it free-hand,” the man explained. “She grew up hearing Bert’s message and was so inspired by him that she wanted to create a painting for our booth.”

The drawing of Bert that caught our eye.

Even though Bert’s message of using natural yard care is probably one of the King County Wastewater Treatment Division’s most memorable campaigns, we were kind of surprised the budding artist felt the desire to portray Bert.

Well, the truth of the matter is that Bert the Salmon (the costume at least) has seen better days and he’s been living in a closet collecting dust. It’s not that we don’t still love Bert, but as one of our coworkers put it, “we had to decommission the suit because it smelled like the sweat of a thousand interns.”

Still, we can’t help but think about that 16-year-old artist and wonder why Bert was such a beloved character.

Primarily, Bert was developed to inform the residents of King County about the importance of natural lawn care.

During the mid-90s, county homeowners were using millions of pounds of pesticides to treat their lawns and gardens while also producing more than 500,000 tons of grass clippings every year. As we know now, it doesn’t take much for the pesticides to make their way into Puget Sound where they damage plant and wildlife and diminish water quality.

Bert and some friends.

Even though the message we wanted to send was simple – mow your lawn high and often, leave the clippings, and fertilize moderately during the right seasons – WTD knew a relatable mascot would help spread this message better than a flurry of fliers or billboards. But what should that mascot be?

Really, the only choice was a salmon because is there anything more symbolic and well-loved by the people of Puget Sound than the salmon? (Well, maybe a seahawk but some organization had already claimed that mascot.)

Bert became an instant hit, but he was always more than just a baseball jacket-wearing spokesfish talking about lawn clippings.

Bert and some other local mascots at a Mariners game.

Bert loved fitness, especially running. He was a huge sports fan who could often be found at Mariners’ games. And he was that rare mixture of fun and informative that we in government are always trying to recreate.

Whether enjoying King County Parks’ natural splendor, or high-fiving friends at a festival, Bert helped spread positive messages about how we can all work to keep King County the beautiful, special place that it is.

Man, we are getting pretty nostalgic talking about Bert. And as I sit here wiping away this pesky fish scale that seems to be stuck in my eye, I can’t help but wonder – will Bert rise again?

What do you think? Should we resurrect Bert?

Let us know in the comments below, and while you’re patiently waiting for the return of Bert, take some time to go check out the species that inspired him during this year’s “Salmon SEEson.” 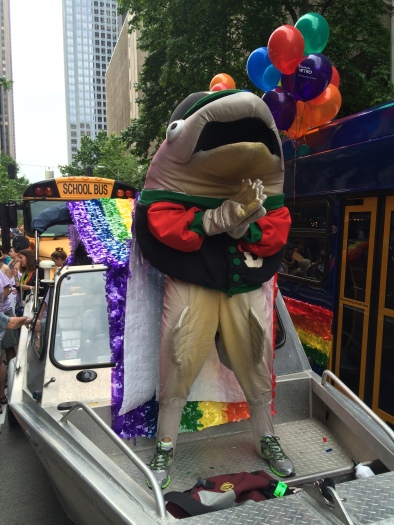 One thought on “Bert the Salmon Rises Again”